We have decided to sell our beloved George Buehler Trawler, LeeZe.  The blog posts on this site are some of our adventures during our time cruising and meant to shed some light on the cruising life.  Enjoy our posts and please contact us for more information on the places we have been or information on our George Buehler Trawler in Izmir and other places in and around Turkey and Greece. The complete collection of our travel blogs can be found here:  http://whereisleeze.blogspot.com

It has taken a while to get this going as I have been quite busy.
Over the winter, we stayed very near to downtown Izmir, @ Levent Marina. It is a small marina, and next to us for most of the winter, was MY Jackson, also a George Buehler designed hull. But where LeeZe’s salon is up, on Jackson it is down. It is owned by an American couple and was built by the same yard as LeeZe.
We actually got our pictured snapped and posted in Google Earth:
  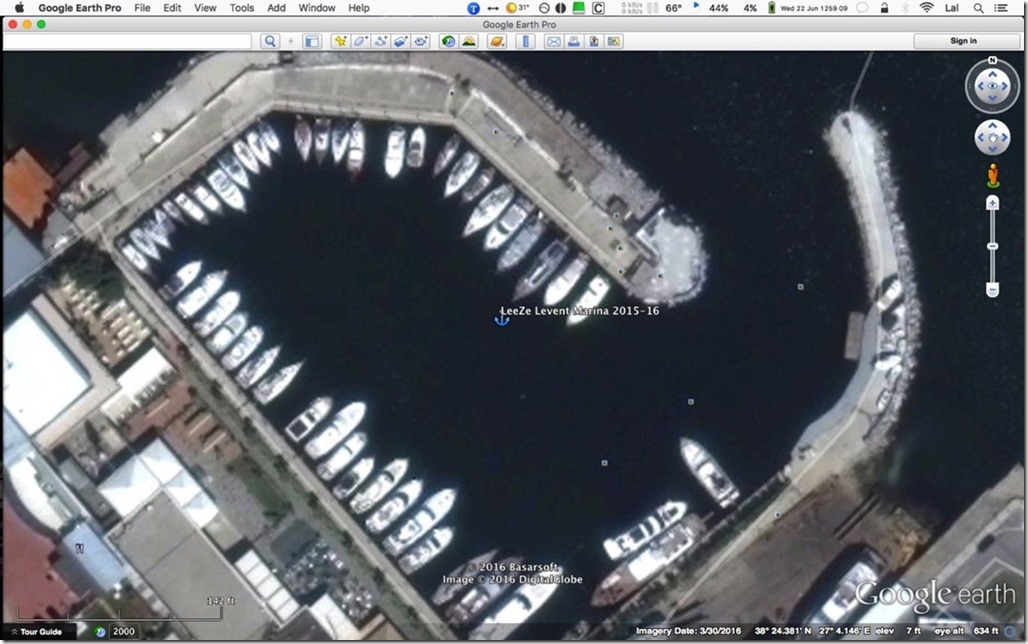 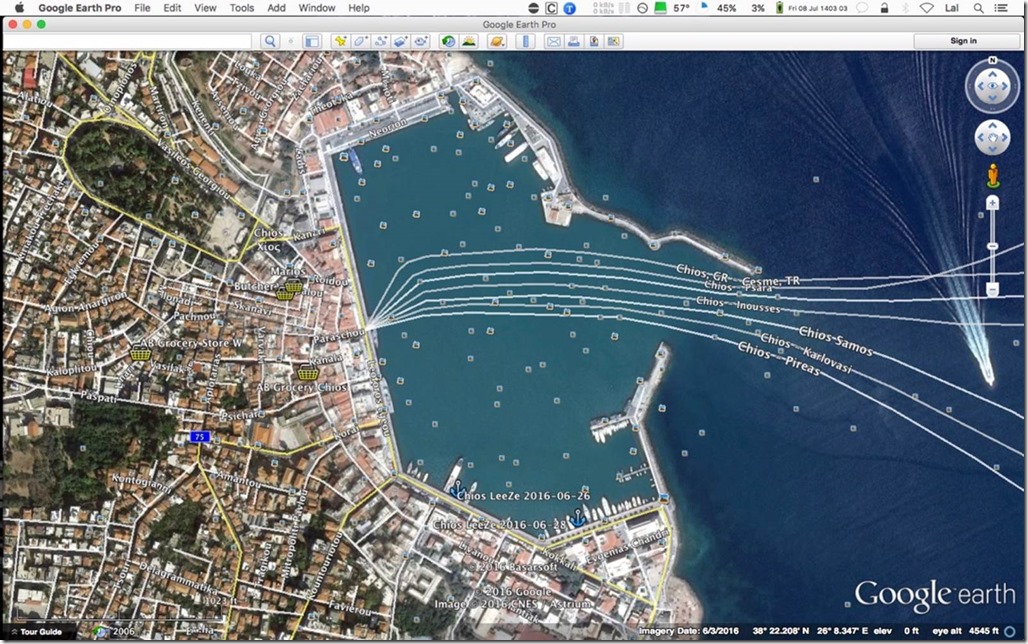 We do move. We get our water and power, and over the next few days, the wind builds and builds, never quite dropping to any speed near close to what we had on Sunday and Tuesday. Stern lines that were fine in light winds are now doubled, chafe protection put on, changed and beefed up again. Bow lines to the wall are put on, with the starboard one tripled because it is taking the brunt of the wind that is twisting LeeZe to port. More chafe protection as the city wall’s rocks are quite capable of eating into these lines quickly.
The wind blows and blows, at times reaching 35+ knots, with white caps in the harbor, garbage collecting on the swim platform (seems the people in charge never clean the harbor of floating trash) and the noise from the waves crashing into the wall is deafening.
One afternoon, for example, after experiencing motion akin to one might experience if placed into a front loading washing machine, we had to get off and go ashore. The waves are so tall that we had to close all the portals in the master cabin as sea water was coming in. It has been like this nearly constant, for the time we have been here.
I am looking forward to moving on, and as of this entry, that appears to be next Wednesday. We MAY have guests arriving this weekend and if so, we THINK they may be departing Wednesday. In any case, if the weather forecast holds, we are out of here on Wednesday!
(And, if any one is curious, so far that Greek Coast Guard patrol boat has yet the show, and there are now 4 boats med moored in its spot, as the wall is somewhat full. It is so full that a 105’ expedition yacht came yesterday when the winds were topping 30+, looked around, asked, and was told there was no room for her. She left, heading North, in a high wind and 2+ meter high crashing sea. Nothing she could not handle, but her crew must have been disappointed that they could not find shelter even for one night.)
2016-07-04: Today is USA’s Independence Day so I am flying the flag. It is a 3’x5’ flag (BIG) and nearly all US flagged boats around here are owned by locals and registered in Delaware, so their US flag is practically no bigger than what one would buy to hand wave at a parade. Even the million $ yachts fly this tiny flags, which really gets me mumbling under my breath “Hey guys, can’t afford a larger flag???”
Zehra goes for a walk and come back with a BIG surprise, Safak Izgi, from Bodrum. She found him at the bus station. He was in Chios to catch the night ferry to Athens, so we have our first guest, if only for a day. This was a very nice and very pleasant surprise! 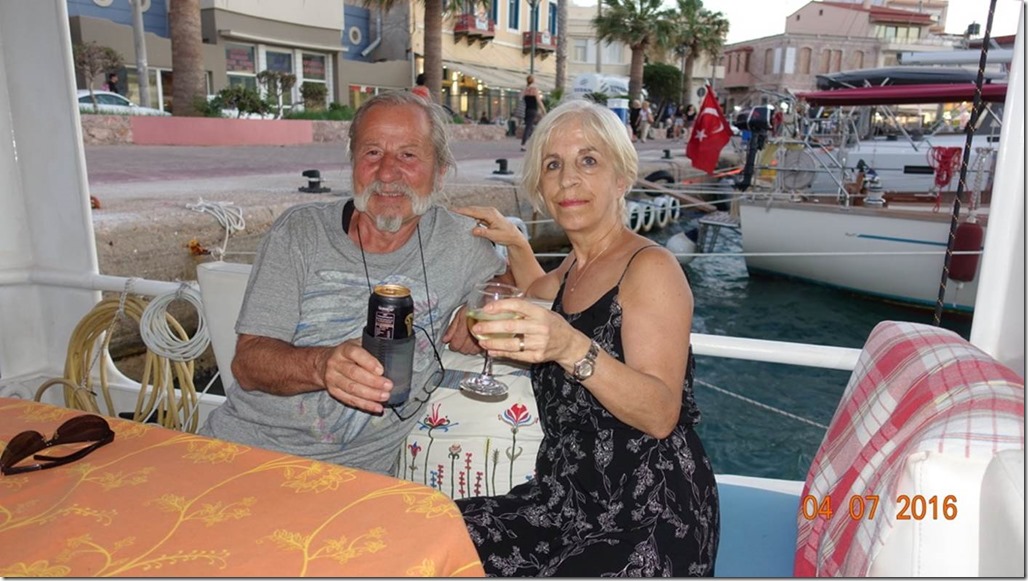 2016-07-10: We have two overnights guests on board, from Zehra’s side of the house, so they are our first “real” guests for this cruise. 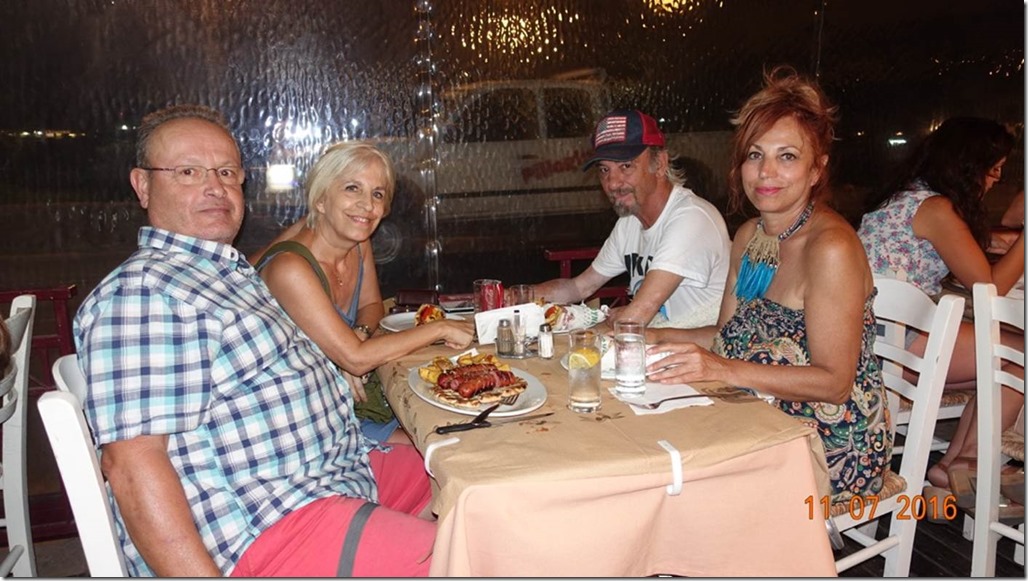 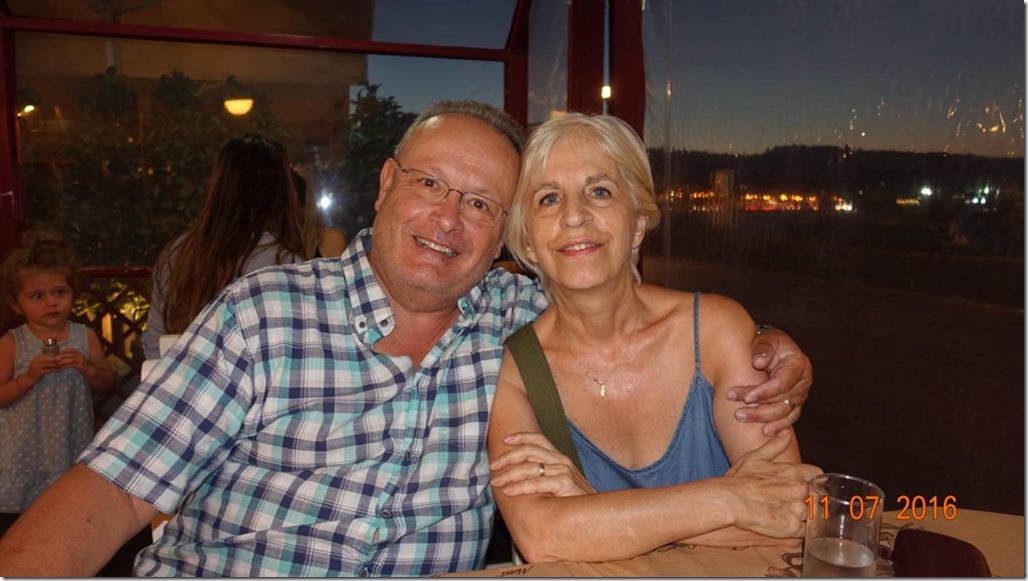 The pictures above are from a dinner out. In nearly all street side restaurants, the “table cloth” is something akin to butcher paper. You eat your meal and they do NOT take away your dirty dishes until you pay and leave. This is because they dump all the garbage from the meal onto the paper, and throw that away. Efficient, but it means that if you want to sit around and talk, you are left with the dishes on the table. Hard to get use to. In Turkey, the waiter is practically taking your dirty dish away while one is lifting the last bit of the meal to your mouth. Also hard to get use to. But at least a dirty look gets him/her to stop. (Ahhhhhh, the pleasures of experiencing different cultures!)
The weather is starting to calm down a little, but the GRIB forecast shows some serious gusts of wind tonight and tomorrow morning. Chios harbor is full of trash down where we are and I got sooooooo tired of looking at it that I take my boat hook and started flinging out what I could catch onto the sidewalk nearby. I am hoping that a street cleaner will complete the job and cart the trash away. Its appears that there is no water craft assigned to fish the trash out from the water. 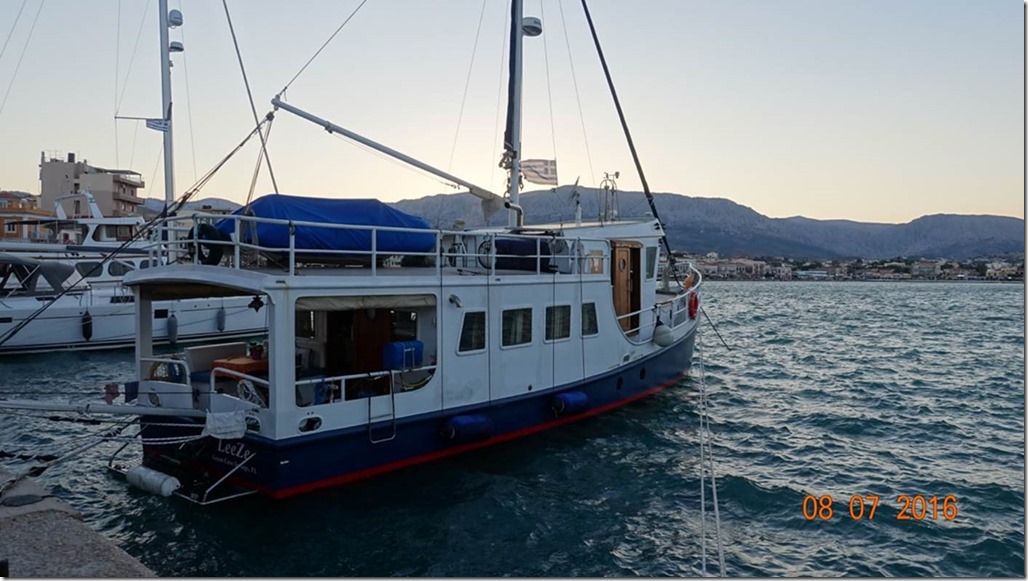 Over the last two days, people were assembling boxes and display on stands on the sidewalk. It turns out these are for book sellers, who, starting last night, put out an array of books for those to peruse and if so inclined, to buy. We noticed many more girls than guys looking at the books as they walked by, and in some cases, we laughed as groups of guys would seem to accelerate their walk as they past the displays. Those boys who did show interest had a girl at their side and when she was showed interest, so did he. What guys will do for the attention of gals! ☺ And, we are told this book street fair will run thru the end of August. One stand had a few books in English. What seem to sell the most were children books bought by the parents for the little one(s) in tow.
2016-07-14: We checked out late last night so about 0730, we are weighing the anchor, taking time to clean the harbor mud off of it. However, the mud is quite reluctant to release our anchor and my tattletale line that usually floats above it is gone, probably chopped off my a passing boat. So, after some back and forth, the anchor is free, full of mud, but free. We depart, and turn South toward Samos. The wind and sea is relatively calm, so we decide to go direct. What this means is that we will cross into Turkish waters, and then back into Greek waters. So, The Greek flag comes down, and with just the American Flag flying off the stern, we motor on. On the radio, a Greek patrol craft is trying to tell a Turkish patrol craft that it is in Greek waters, and of course, the Turks disagree. This goes on for more than an hour and finally the Greek stops talking. I can tell you that around the Chios/Cesme area, the international border is in dispute because neither country has agreed as to where it is. So, most of us ASSUME it is half way between the two, but as there is no treaty, there is plenty of room for disagreement. We pass a Turkish Coast Guard frigate who shows no interest in us at all. Off in the distance, EU and Greek patrol boats are also patrolling, all part of the agreement to control the illegal entry of refugees into the EU.
Lat year, in Mytillini, there were THOUSANDS of them. This year, in Chios, maybe a hundred? The agreement inlace seems to be working.
For those that care, here are the particulars for Chios:
For assistance, call Koumis Stelios (Ch 69 or +30 694 686 1747)
Need 220 VAC 63 amp or 380 VAC 3 phase plug for metered shore power the SE side of the harbor. Come with these adaptors or be prepared to either go without electricity or pay a huge premium to get them made on the spot.
The SW side is a pre-pay as you go system. Mr Stelios can sell you the tokens. These outlets are 220 VAC, standard 16 and 32 amp outlets.
Do not moor in front of Goody’s Hamburgers no mater what the Port Authority says. That berth is for a Greek Coast Guard patrol craft and they will make you move if they return and you are in it.
The port makes no effort to remove the trash from the water.
When there is a sustained North wind, the SE and SW side of the port is rolly and uncomfortable, with white caps within the harbor a possibility.
When the Blue Star ferry comes in, it comes in at great speed causing all of the boats to “rock and roll” quite uncomfortably. Efforts to get that ferry to slow down have been in vain per Mr. Stelios and the Port Authority.
Nearly all other ferries come in a dead slow, or near to dead slow speed.
“Municipal Marina” daily fee this year for a boat up to 15 meters is 170 € /yr times length + Vat all divided by 365 days
“Municipal Marina” daily fee this year for a boat up to 16 meters is 200 € /yr times length + Vat all divided by 365 days
Cats pay more.
Electricity is 0.30 cents per Kw and 3 € per ton, VAT included.
I will blog about Samos in the next edition, but as many of you know, there was an attempted coup in Turkey in the early morning hours of 16 July. It failed. There are some reports that suggest that maybe even the government “staged” it for their own political agenda but that could just be conjecture. The Turks wrote the book on how to stage a military coup and this one was so poorly planned and executed that it had NO chance of succeeding. (My opinion, not worth the paper it is written on.) Zehra’s entire family is safe, and so are her friends. We both thank all of those who wrote in and were concerned about us and her family.