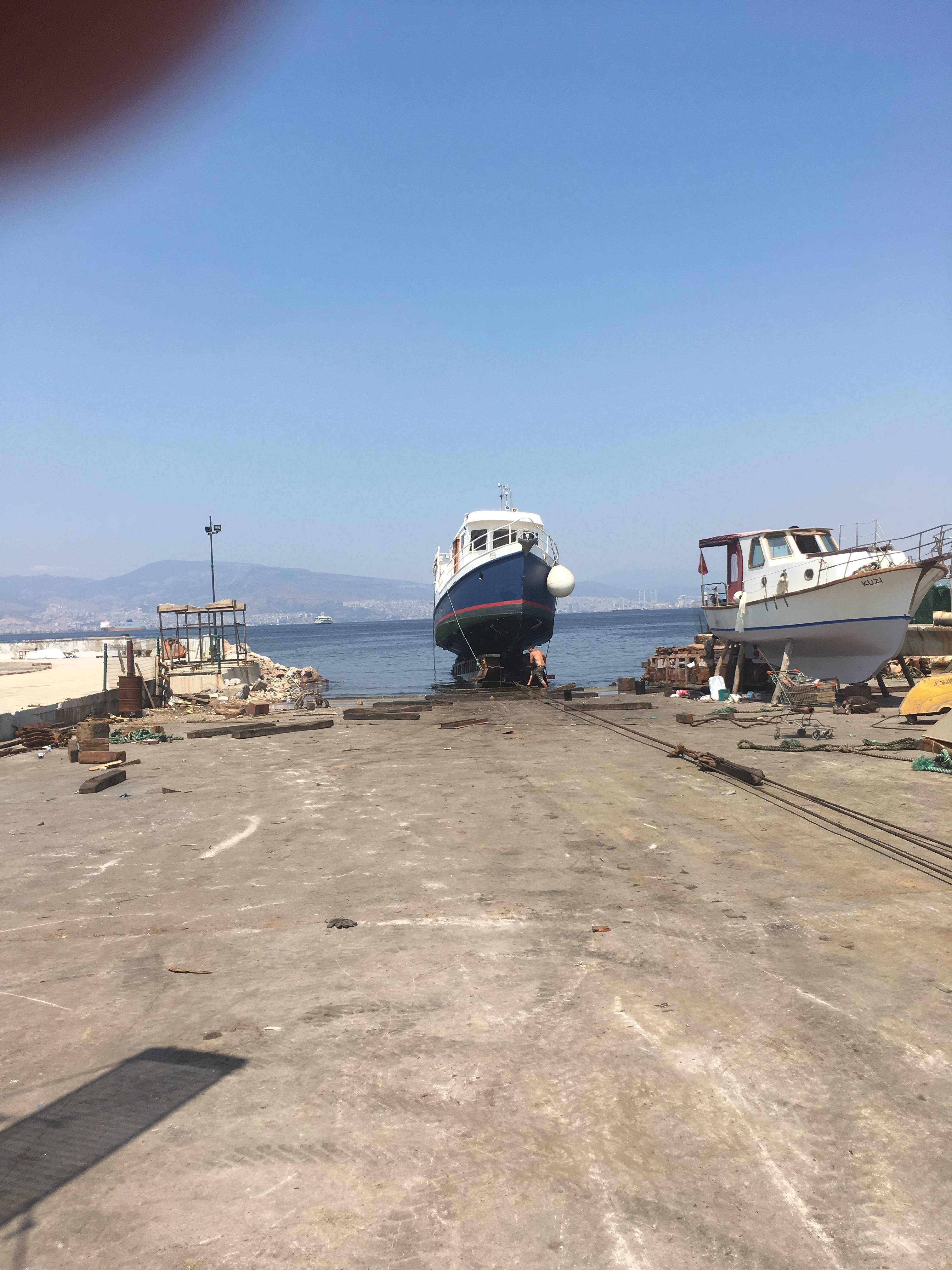 The process of putting LeeZe on the hard for a 30-day maintenance period has begun.

A whole lot of sanding is happening. Outside, the entire boat is to be painted so the painter is working hard to prep those surfaces that need it. In some places, “putty” is also being applied to make the sanded surface meet up nicely with the surrounding area. On the bow, putty is being used to erase a few of my mistakes when docking over the years 😀😀😀😀
The doors have been removed repaired, sanded and the door sills sanded. The inside floors are also being sanded. All in prep for applying varnish. The amount of sanding dust is remarkable. It took the sanders longer to cover the surfaces with plastic than it did to sand.
Welders attached 15 zincs (each 3 kgs) to the bottom and these should last until the next haul out in 3-4 years.
I finished working on the mast and boom. I stripped nearly everything off of both so that there is no need for masking when they are repainted. I also added some cleats to help manage the lines on the mast and boom.
I had two covers made. One to go over the depth sounder hull opening so that when I pull the device out from the engine room, the amount of sea water that comes thru the hole until I can get a cover on it SHOULD be significantly less. I also built a cover for the cofferdam, to be used during the off season. I have found that Citric Acid (a powder) can quite effectually remove barnacles and other sea growth quite effectively. The cover will allow me to clean the entire sea water piping system including the stern tube and cofferdam, in one or two applications. Right now it is a cumbersome job to clean the entire sea water piping system.
More work to follow next week!

2019-07-21: There is a lot of boring stuff happening. Mainly sanding and grinding to prepare to paint. I have removed, with much difficulty, over 22 cleats, two winches, and numerous pulleys in preparation for the yard to paint. Many of the cleats had to be destroyed because the bolts bolt did not want to come out. Tried everything but heat. The cleats are black plastic and heat was not an option.

This got me on a quest to find EXACT replacements, as I would prefer NOT to fill holes, drill and tap. This quest lead me to two stores in Istanbul (by email), one in Çanakkale (by phone), and 7 stores in Izmir, by foot.
The Çanakkale store TOLD me that he had what I needed in stock, but in fact, it was shorter than what I needed. The catalog said it was 220 mm long, but in fact, it was ONLY 209. Got six (can use other places) but cancelled the remaining.

Back to the search.

As luck would have it and I do mean luck, I would one store in Izmir (last one visited, as usual) that had one only, AND his Istanbul supplier had no more in stock. (Since they were NOT hot items, they had no intention to get more, even for me!)
But this was a clue. This cleat had markings on it. It was made by Nuova Rede in Italy and it was marked 1341.

Thought I had a path forward but alas, Nuova Rede’s catalog showed a new part number for the item, labeled 220 mm long, but the technical drawing had it only 209 mm long.
Per Internet search, 1341 was last offered for sale in a 2011-12 catalog.
Further sleuthing found another brand that said it was 220 mm long. But could not find a tech drawing for it.
I did find a company in Finland that sold them so I sent an email with my request on Saturday.

Remarkably, the company responded Saturday night with the technical drawing, confirmed that they were actually 220 mm long and that they had enough to send to me.

Now I just need to get to LeeZe and verify dimensions.

Other work: The local Izmir company that installed my Nav Suite in 2010 came out last week to check the VHF comms suite. I thought that was needed BECAUSE it is much easier to replace antennae and wiring when the mast is down. To make a long story short, the antennae were still in great shape, with physically and electrically, the antennae were not, so 6 new ones were installed wrapped with what appears to be lots and lots of silicone stretch tape, and the coax cables, after being cut back some 2-3 centimeters, were also found to physically and electrically good. Two Ethernet connectors were replaced also.
That is it for right now!

On June 26, the radar cable was disconnected from the radar. All of the other cables in the mast were either disconnected or cut. The radar cable is the only cable in LeeZe’s mast that can never be cut. It is impossible to splice and next to impossible for a new cable connector to be installed. This is the first time the mast has been removed since new construction. The yard wants to paint it, and that is easier when it is down. I want to inspect hardware, electrical parts, and antennae for sun damage and wear. So, down it came.

June 27: LeeZe is taken to another berth when the mast, boom, sails, and tender are removed by crane. That afternoon, with the help of the Yard’s docking Captain, LeeZe is taken to the haul out area and motored onto the skid. It takes about 20 minutes to get LeeZe placed correctly before the engine is shutdown and responsibility for the haul out is passed to the yard. Having made the ride before, I elect to get off with the Captain and watch from solid land.

The motion is like a slow moving jerking motion. As LeeZe weighs close to 50 metric tons, the thick steel cable attached to the skid first stretches a little, then pulls on the skid, which moves, which relaxes the cable a little and repeat.

June 28. Today is spent putting LeeZe into its final resting place for the maintenance period, setting up the blocks so she does not fall over, and removing the skids.

The yard, Zehra, and I were amazed as to how clean the bottom was in total. Three years ago, this same yard sprayed on Jotun’s Seaforce 90 bottom paint. It seems like the combination of the paint and the application allowed me to go three years between haul outs. This year, after sandblasting, we will apply the same paint again.

Upon inspection, nearly all 22 zincs need to be replaced (a good sign). The amount of growth on the shaft and parts of the rudder suggests that I should consider bagging both during winter layup periods.