We have decided to sell our beloved Diesel Duck Trawler, LeeZe.  The blog posts on this site are some of our adventures during our time cruising and meant to shed some light on the cruising life.  Enjoy our posts and please contact us for more information on the places we have been or information on our Diesel Duck Trawler for sale, LeeZe.  The complete collection of our travel blogs can be found here:  http://whereisleeze.blogspot.com

The anchor windlass was repaired in Kusadasi and with family on board as guests, we depart for a leisurely cruise around the Çesme peninsular toward the marina w have chosen to winter over in. Our policy for the guests is that we IMPLORE them to sit and enjoy the ride, and not try to prevent any damage to LeeZe as LeeZe is ~50 tons and while I can fix LeeZe, I cannot fix humans. But on of our guests is the brother to Zehra, and he has bought a new 10 meter boat for delivery in 2018. So, since he is a neophyte at this boating life, he wants to learn. Now, I believe that there is not much I can teach and show him. His boat is no more than 6 tons, a day boat, that does 15-20 knots. But, he still wants to learn so I do let him do a lot, but always under my direct supervision. I try to point out where and how one might get hurt and h comments that he never would have thought of this or that.

So, on 17 Aug, we depart Kusadasi, conduct an anchor test in the bay, verify all is well and make our way to Sağacik. 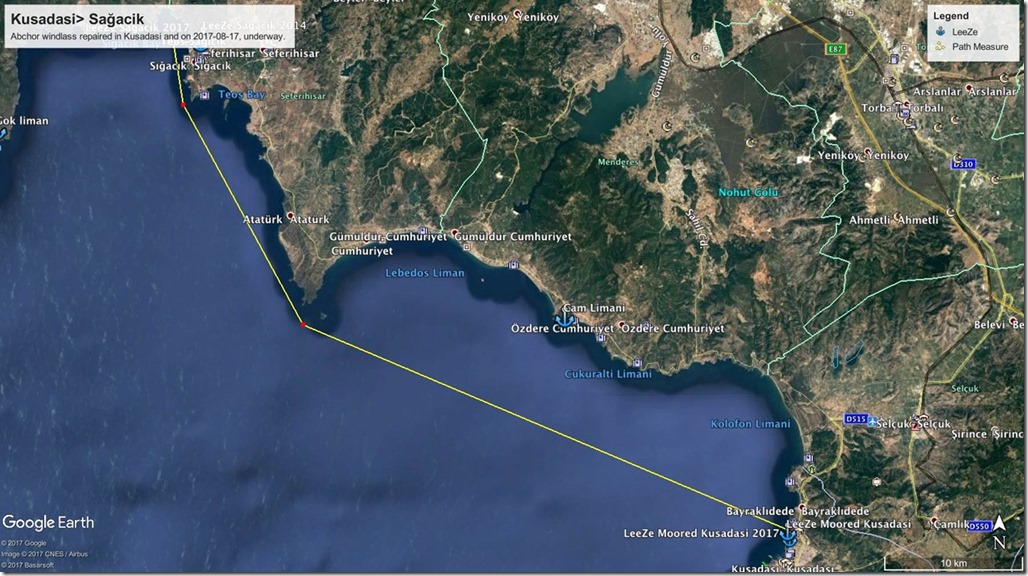 The NE wind is above 20 knots for nearly the entire trip but since we stay relatively close to the coast, there is not enough distance for the wind to build the waves. We anchor In the bay close to where we had anchored in 2014.  Sağacik is a very cute town, with a somewhat restored coastal /fort on the bay where on Sundays, a superb local food farmers market is held which attract buyers and people from many miles around. 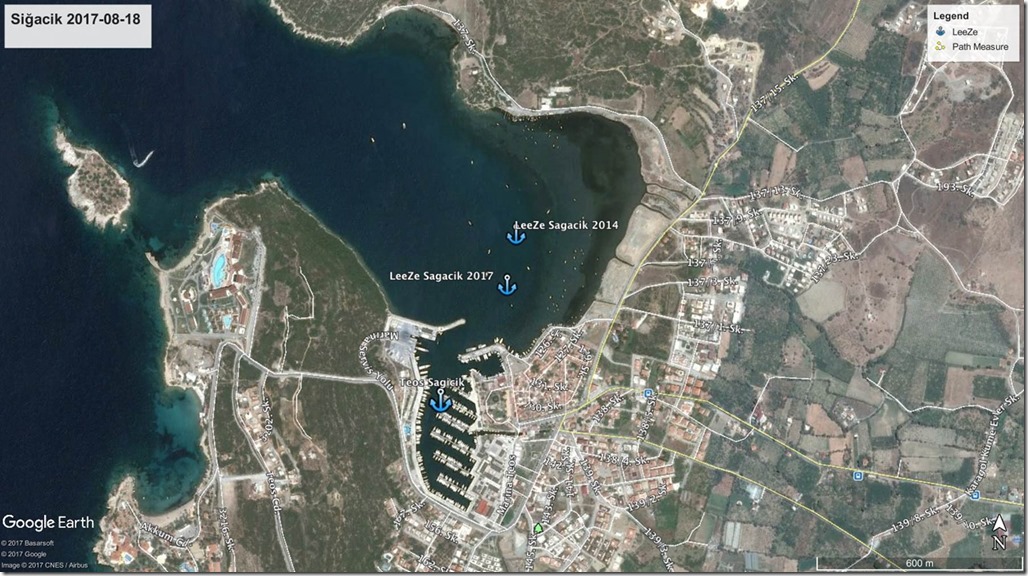 There is a marina here called Teos where we stayed one night when we were on the East-Med Yacht Rally in 2012. We stay here two nights, going ashore both days. One of our guests was last here about 35 years ago and while he notes that much has changed, a lot more has not.

On 19 August, we depart for Sarpdere Bay. This is not a long run but the wind has had some distance to cause some waves as we cross the open bay. 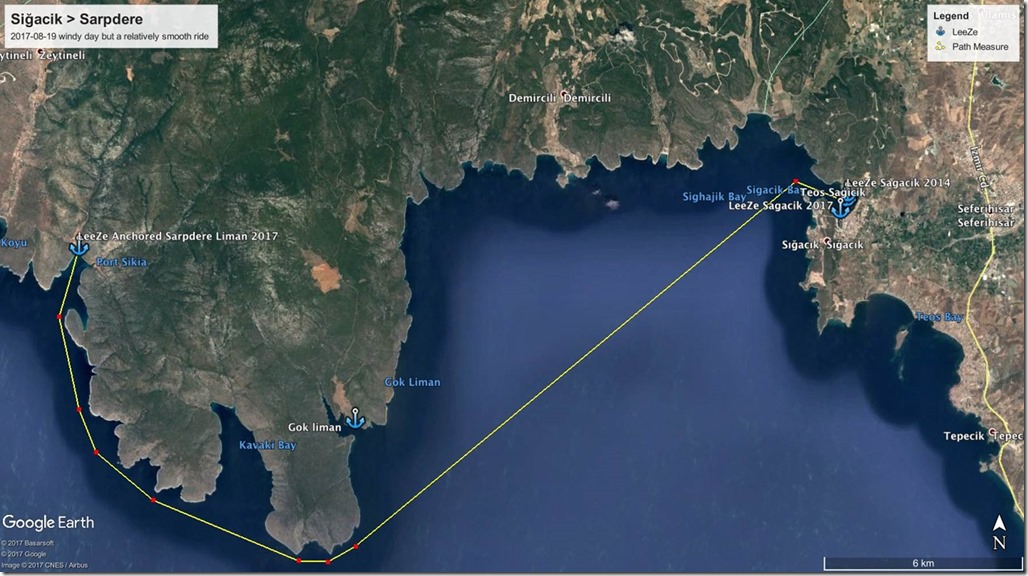 As the crow flies this area is close to Izmir, Turkey’s third largest city, so there are MANY fish farms, some so long that they are more than a nautical mile long. There is one that is so long and wide that it blocks the direct path into Sarpdere bay. One ends to see the huge red buoys that denote a passage between the fish nets. We find one, but the width of the gap may be at most 50 meters, and the fish farm hardware is appears to be quite strong and visually imposing. A loss of propulsion or a loss of the rudder would have one in extremis quite quickly and with the depth more than 100 meters in most places, dropping the anchor is not an option.

So thankfully, LeeZe has no problems and we proceed safely thru the farm to the bay. 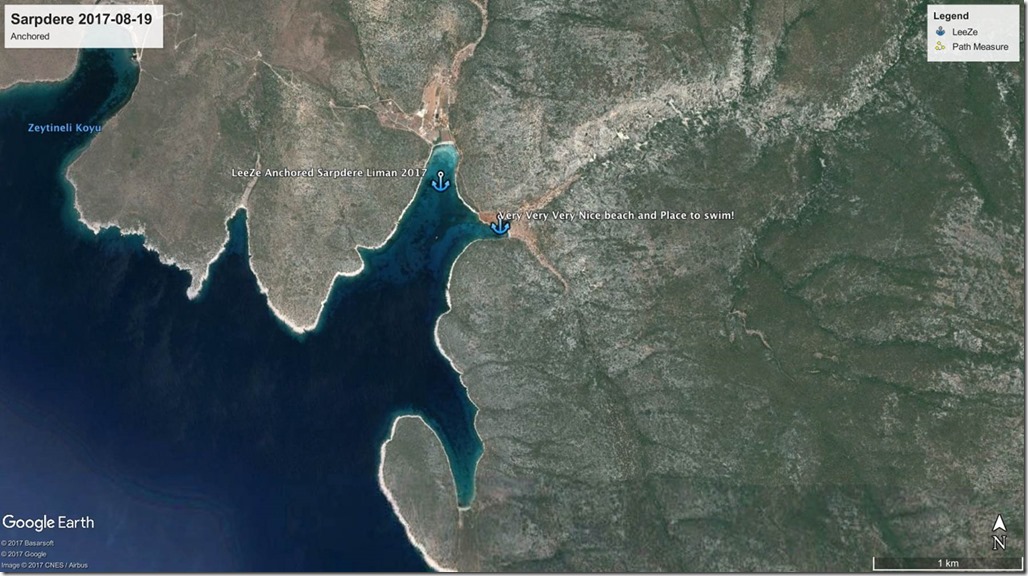 Our plan is to stay one night because the GRIB forecast predicts a good day tomorrow to go to Çesme. We had a BBQ, a swim, and talk quite a lot before retiring for the night.

On 20 August, we depart for Çesme. 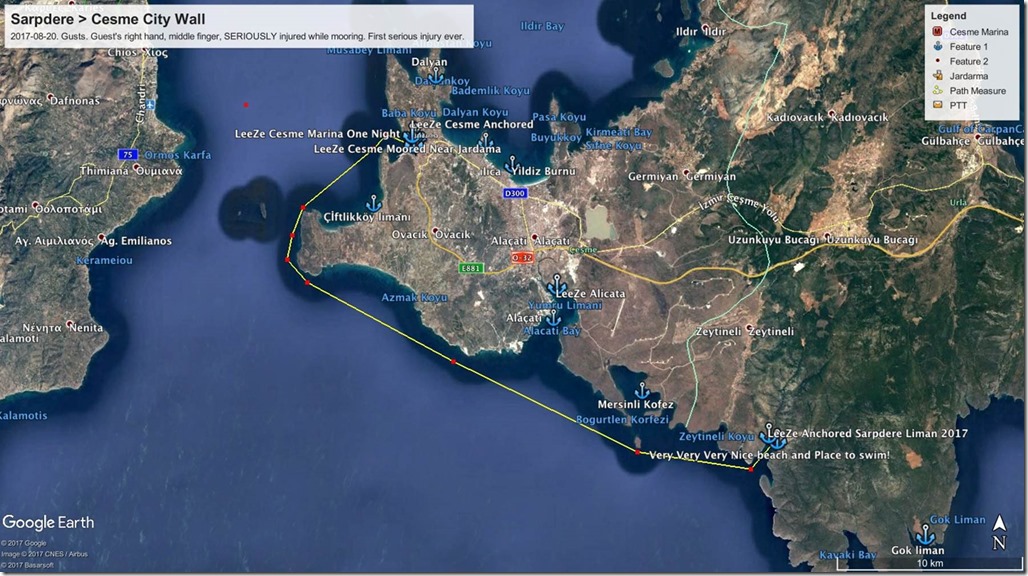 The wind is 20+ knots as we go around the peninsular, and we arrive at about 1400 or so in the bay.  Now, we have stayed here before, so we know that we have to get directions from the day trip boat Captains as to what mooring spot we can use. It turns out some of them remember us so they tell us to moor in front of the local post office.

This bay is mostly open, and from experience, can be quite rocky and rolly at the wall. I also now that this is a bay where one really must have more than 100 meters of chain out, angled at about 20-30 degrees off the starboard bow. That means for this particular case we I drop the anchor to the north of the post office, and then med moor.

The wind is blowing 20+ knots so after I get the anchor down and confirm it is holding, I go aft to ask our guests to sit down and enjoy the ride, as Zehra and I know what we are doing.

I go forward to the helm and we get LeeZe close enough to get one line over. This is a great sign as it means that it is just a matter of time until we are along side.

20 minutes later, we are at the wall. 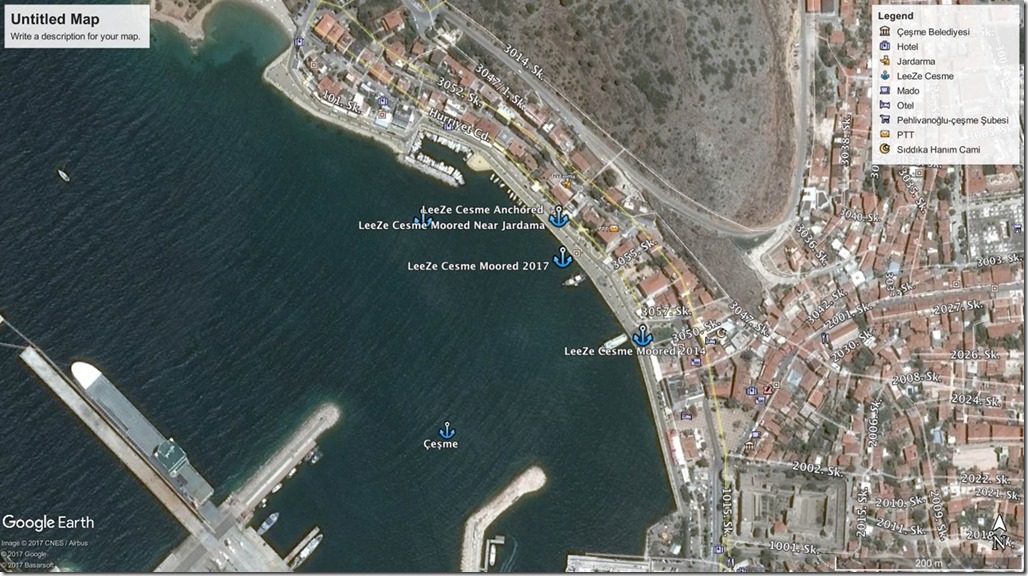 We also had a visit from a couple who we use to hang out with a lot while will lived in Chicago 15-20 years ago. It was fun to note how all of us had changed, or not changed, and to catch up.

Finally, we catch a break and on 29 August, we depart Çesme for Eğri Liman Koyu, a long and narrow bay that offers protection from early very direction. 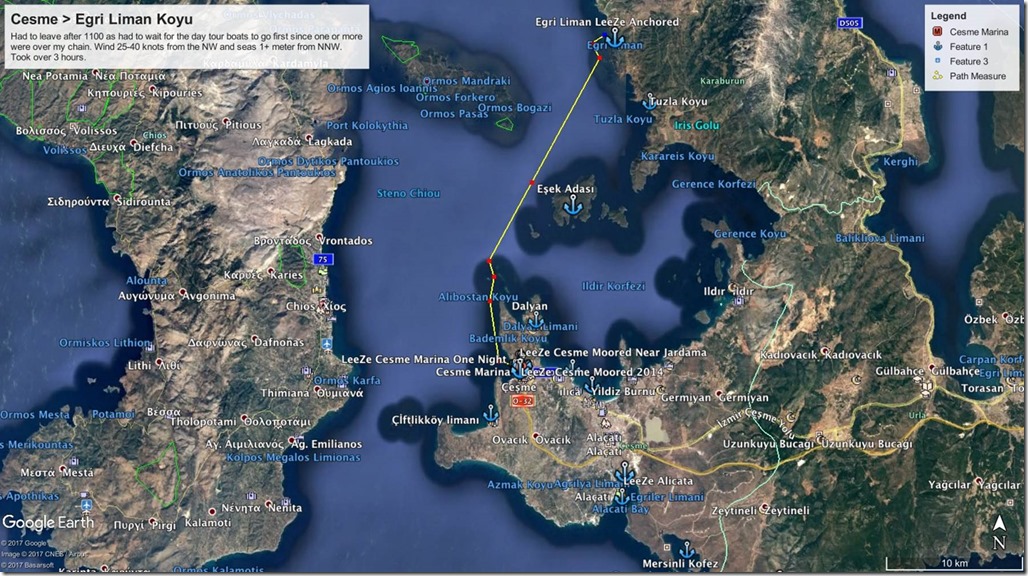 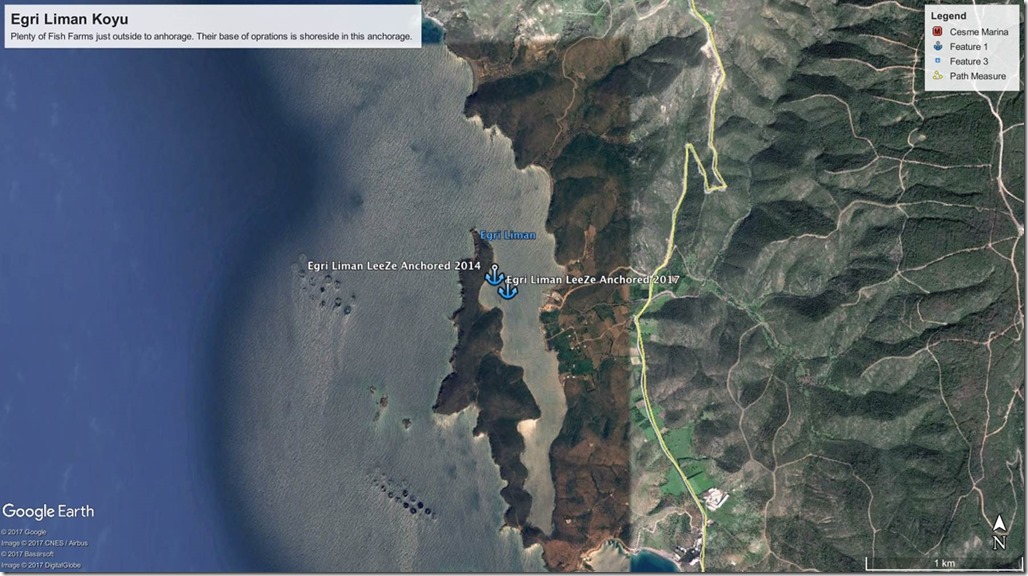 Now, per the port guide and the chart, there is good anchorage deep into the southern part of the bay, and also at the western beach area. The chart also reports that the bottom depth by the beach rapidly becomes shallow.

Knowing all this and having been here before in 2014, I elect to anchor in front of the beach at the southern end. But first, we took a quick tour with LeeZe in the beach area and did confirm, by nearly running around, that the bottom does rapidly and un-expectantly shoals. That got my hart racing a little.

After anchoring, and verifying that we are in fact holding, there is a wind shift and now we are about 50 meters from a small cliff and a rocky outcrop. Ugh!

The wind picks up some more and by nightfall, it looks like we are getting very close to the cliff. I know it is an illusion because it being night time, but it is still quite unsettling.

So, the next day, we pickup anchor and move a few hundred meters toward keeping water and again anchor. The weather this day dos NOT support us moving on.

A friend also told us that there are two large red buoys in the middle of the bay that we can tie up to. When we arrived, we saw a fishing boat tied to th one closest to the entrance  and the other one deep in the bay empty. We did “toy” with the idea of tying up to it but in the end, it was occupied most of the day by various fishing boats.

On 1 Sept, we lifted anchor and got underway. We poked our nose out and found 20-30 knots of wind from the NW and just under 1 meter high waves and whitecaps. Decided to come back and anchor again, and the Admiral was not happy. But it has been like this all summer. The wind has been quite uncooperative.

We try again on 2 Sept and the seas are a little rolly but th wind is low, so off we go to Mordoğan. In all of the times we have boated in Izmir Bay, we had never been to Mordoğan. 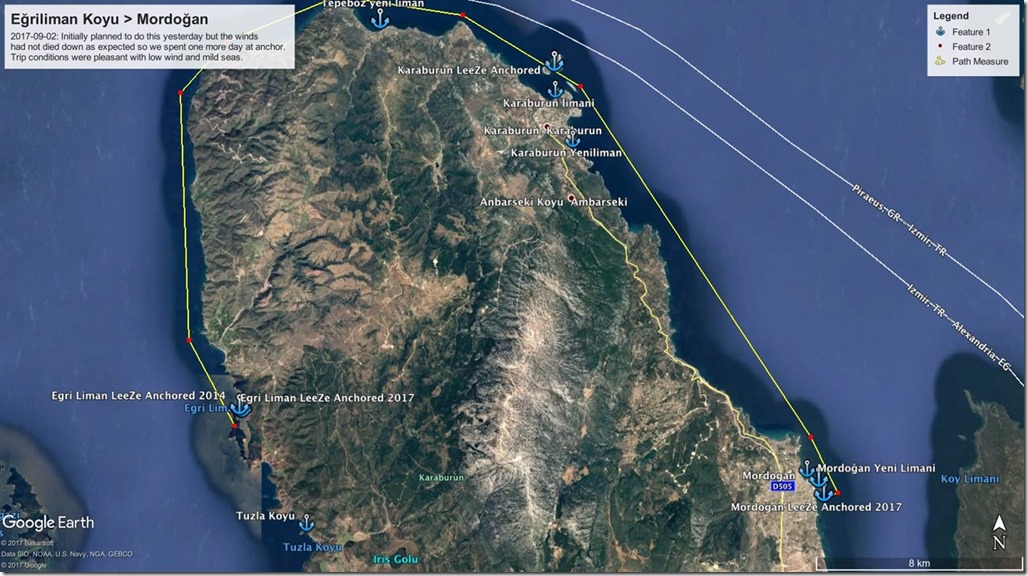 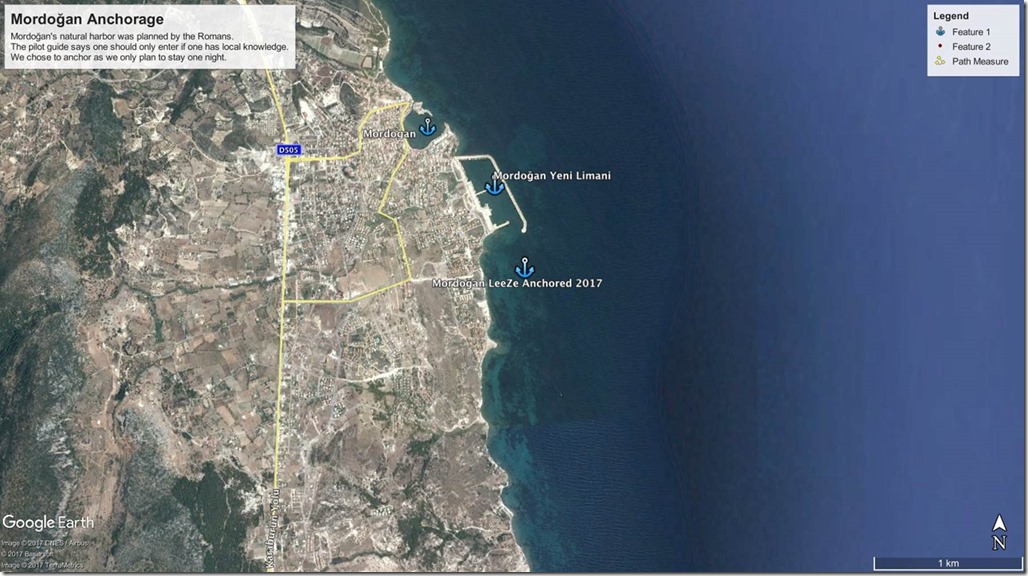 Mordoğan Has an old harbor which the port guide says not to enter without local knowledge. There is also a marina to the south of the old harbor that has never been finished. What we see when we arrive is a fast ferry moored inside the old harbor that goes to Izmir as well as a dredging ship. We continued south and anchor close to the mouth of the “new” marina.

Weather in the bay is very different than in the Aegean, and we luck out because for the next few days, it appears that the seas will be absolutely flat.

Today though is part of a 10 day holiday that the government created because Tourism has been deeply affected by the current geo-political climate. It was thought that by creating tis long holiday, Turks would take to the roads and go on holiday. Later, thru the newspapers, we learned that th tourism industry did NOT get the boost that was expected because this current geo-political climate has also affected imports and exports, the economy, and unemployment. The 5-star all-inclusive resorts were charging over $1000 for two to holiday with them, and the turns out to be way too much money for way too many people. By the time this was known, much of the holiday period had already come and gone so there were no real winners, and many losers.

We saw this in Mordoğan who we went ashore. There were many visitors to Mordoğan, but nearly all had Izmir license plates on there cars. We did eat shore that night in the old harbor area and the meal was quite good and “normal” Turkish prices.

That is all for now folks!
If you have any questions, please ask.
Lee and Zehra
MV LeeZe
You can find older blog posts here:  http://whereisleeze.blogspot.com