We have decided to sell our beloved George Buehler Trawler, LeeZe.  The blog posts on this site are some of our adventures during our time cruising and meant to shed some light on the cruising life.  Enjoy our posts and please contact us for more information on the places we have been or information on our George Buehler Trawler in Samothraki.  The complete collection of our travel blogs can be found here:  http://whereisleeze.blogspot.com

However, this being boating, plans can change, and in this case, they did. The weather was sooooooo nice on the way to Gokceada, that, after I check my GRIB weather forecast, we decided to push on to Bozcaada. About 1-1.5 nm north of the start of the traffic separation lanes for the Çanakkale Straits, the winds and waves change from nice and friendly to angry and confused. 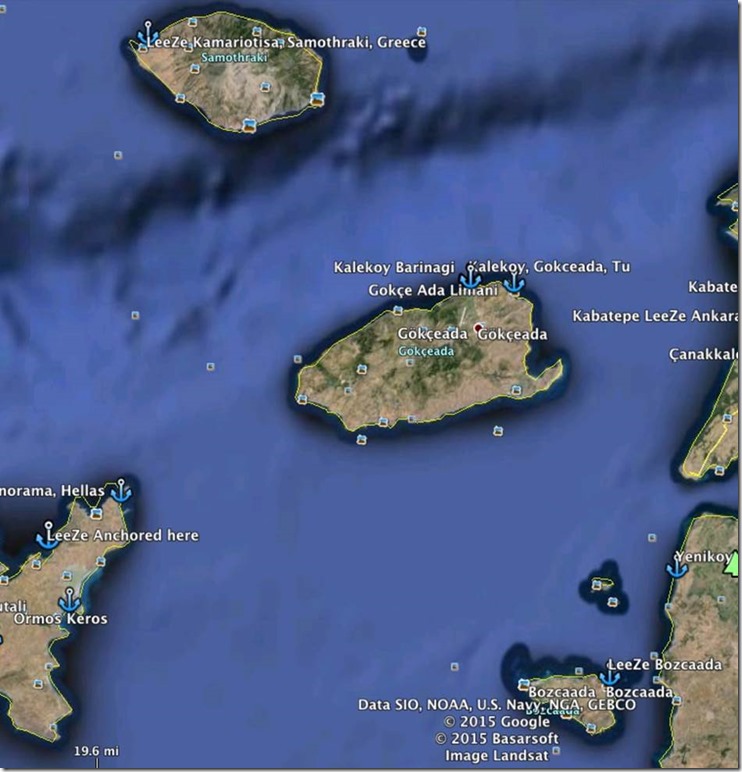 Maybe it was something that I missed (although later, I could not determine what I missed) but the seas rapidly build to over 2 meters at times, winds gusting to 60+ knots, and LeeZe rolling side to side. At some point, although strapped down, the tender on the boat deck comes off its mounts and landed on the starboard side, thereby increasing the effect of a roll to starboard by a very perceptible amount.

The NEAREST safe port was Yenikoy, on the south side of the Straits, about 8-9+ NM away, but speed over ground (SOG) was < 2 knots and we did not want to take this for that long.

A safe and reasonable course took us to the west, far out of our way to Bozcaada.

Turning around to Gokceada was not possible because the seas made the rolls even more frequent.

So, I elected to run SOMEWHAT south and west, taking advantage of the wind and the current. SOG was some 7+ knots.

There are some small islands just south of the southern limit of the traffic separation lane that if I could just get to them, MAYBE they would help block the sea conditions. (The port guide says there is no safe place to anchor or land on these islands.)

So for 3+ hours we slug on, making course changes as needed to the east so that I do not drift too far away from the islands. Oh yes, I did forget to mention that I hand steered for these 3+ miserable hours. The autopilot was working, but the numerous changes required  prevented its use.

Most of the stuff on LeeZe that we had not stowed for sea was now on the decks, and even stuff in the Engine Room moved (a little). It was a mess. The aft door broke off its mounts before we could get it secured, the lazarette bilge pump failed, forgot to latch shut the hatch to the lazarette so the sea water coming over the aft deck was what was filling that bilge, and there was green water coming over the bow during each and every turn, and some of it ending up on the Pilot House windows. Even the solar panels above the pilot house had a layer of salt on them by this time.

Zehra was ABSOLUTELY not happy, and in the end, for the first time since we owned LeeZe, I proclaimed that this day was NOT a fun day!

But I digress. We make it to the vicinity of those islands and the seas calm somewhat.

Once we passed south of these islands, I was able to steer a more direct course to Bozcaada. The current was pushing us along at more than 7 knots and at around 1900, some 11 hours after departing, we arrive.

We are tired, beat, NOT happy, etc. etc. etc. and now we have to deal with the locals who are waiving and yelling at us (and doing that ridiculous dance) to come tie up here, or there. All we want to do in anchor and rest, but we come to the realization that the harbor is just too small and crowded to do that, and a quick check of the charts indicates there is no safe place to anchor around the entrance of the harbor.

Why is it soooooooooo HARD to get the harbor master to talk on the radio??????????????? Why do they elect to scream from shore, do a funny and ridiculous looking dance to indicate where they want us, etc… Just pick up the radio and call us on Channel 12, JUST LIKE THEIR PORT GUIDE SAYS THEY WILL DO!!!!!!!!!!!!!!

Zehra needs more time to collect her thoughts than we have but we have to decide where we are going to tie up. So, she soldiers on, and we accept their offer to tie up side to at a concrete pier taller than LeeZe, just ahead of the fast ferry dock. 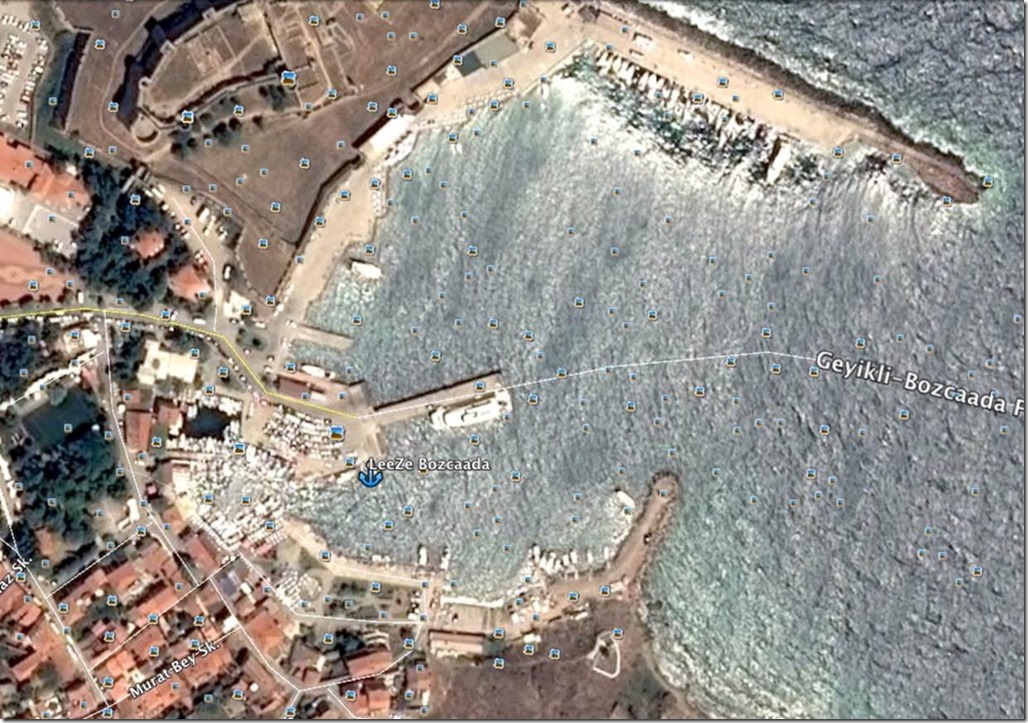 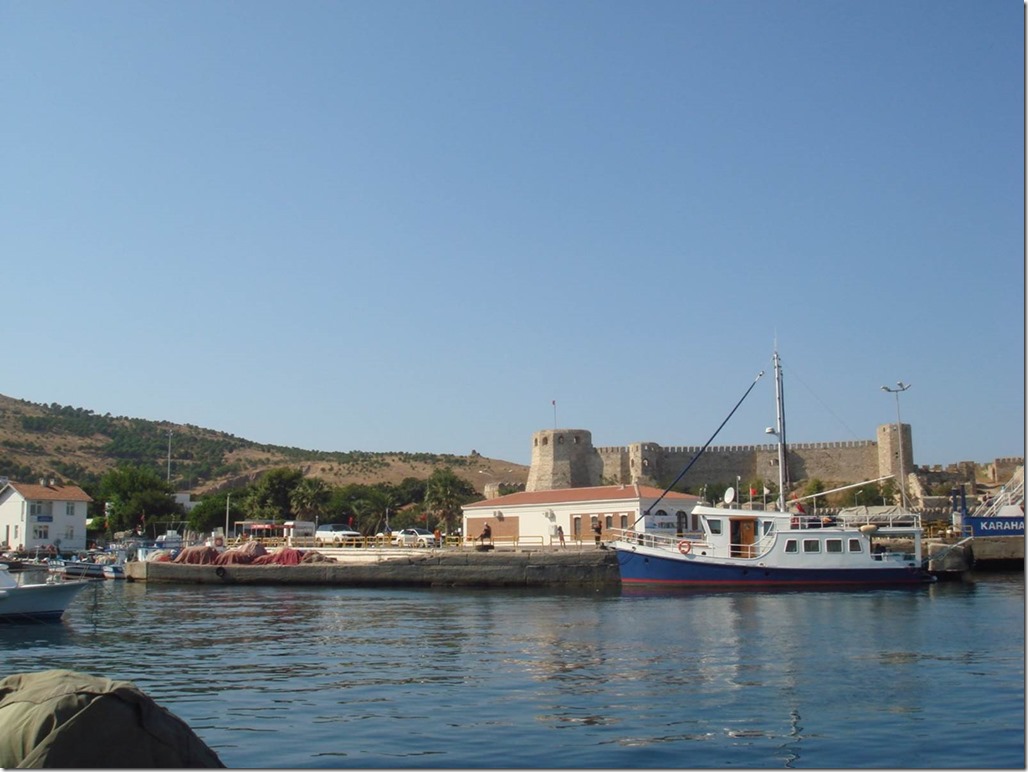 We do tie up, and then we collapse.

By the time we leave LeeZe for dinner at 2130, we had picked up all the stuff that had fallen (did not put them back where they belong yet!), did a temp repair to the aft door, and cleaned ourselves up.

We dragged our sorry asses to a restaurant to eat, only realizing later that Bozcaada is one terribly expensive place to eat, buy groceries, and moor.

The next morning, GRIB indicates that it is BEST not to resume our trip south until at least Wednesday, 2 Sept.

So, we are stuck here a few days. I make repairs to the door and jury rig a repair to the broken bilge pump. There is no water and electricity at this pier. Since the step ashore is about 1+ meter high, getting off and on is not an elegantly executed event.

But we make do. We come to learn that our daily port fee is over 110 Tl ($37+) a night, but Zehra, bless her soul, goes to the Port Captain and negotiates a one time payment of 100 TL for as many nights we need to stay until the weather improves.

There is not much more we can say. This port is expensive. Probably the whole island is. Ferries arrive frequently. The pier we were at is safe and secure, but 10 meters ahead of me, rocks are just below the surface. Most boats med moor to the pier immediately to starboard of the harbor’s entrance. There is electricity, water, and mooring lines there so one does not have to use your anchor to med moor.

2015-09-02. Today is Wednesday and per GRIB, this is the day to move south. So we depart, stick our bow into the channel, see that it is nice, and turn south. This time, I have numerous places along the Turkish coast we can duck into, but we do not have to.

Approaching Babakale, I hear an alarm that I do NOT recognize. A quick check shows the engine is fine, bilges are fine, but the alarm continues. I look UP where my radios are (they are above my head) and I have a DSC alarm. Someone is in trouble and they pressed their distress button on the radio.

OK, now what? Try to call the Turkish Coast Guard (TCG) on the cell phone but they have no English speaking people on duty right now. Zehra talks to them but cannot get them to understand.

Try to raise anyone on Channel 16 and one person answers but cannot help. Finally call “Olympia Radio” (Greek authorities). They respond, and after some confusion that it was not ME that was in distress, they finally tell me that the call in on the Turkish side of the sea border and the TCG is responding.

So, it probably took you all of one minute to read this. In fact, it took me an HOUR to resolve. Meanwhile, we had decided to bypass Molivos as the weather was still good and push on.  (About an hour later we pass a small inflatable full of people. They make no effort to signal us and I do not give it a passing thought. A Turkish patrol craft was nearby but just “hovering.” Later, I figured out they were waiting for a Greek Coast Guard (GCG) boat to come by to rescue them. They were clearly in Greek territorial waters.)

We push on, having a 1+ knot current to our advantage for nearly the entire run.

At about 1900, we arrive in Mytillini. Our plan (once again) was to anchor between the marina on the southern end of the port and the commercial docks. But, Zehra suggests we poke our head into the inner harbor to “check it out.”

As we do, we again have a person, this time a GCG person in uniform, yelling at us and doing that ridiculous dance telling us we have to tie up at Customs. I chose to ignore him but he is insistent. So, I come to a dead stop inside the inner harbor and call the harbor authorities on Ch 12. They respond. I ask about this ridiculous looking GCP person, they ask a few questions, I respond, they tell me to ignore him and I am free to med moor between the inner wall pier locations 26 and 28.

The inner wall is empty except for two boats, moored side too. The weather is dead calm, so Zehra says lets moor.

With her help, I drop the anchor in the right place as required, and moor without incident. Three young men ashore help us tie up, one Syrian, one Iranian, and one Afghani. It dawns on us quite quickly that the charm of Mytillini is being masked by about 10000+ refugees that made their way from Turkey to Greece, awaiting processing by a government so broke it cannot afford a camp for them to stay. The Government appears to be processing their paperwork at a reasonable pace, but more refugees are arriving than departing.

It appears from discussions with the locals that about 2000-4000 refugees arrive each day from Turkey, and the ships the government has chartered to take them to the port of Athens (so they can proceed to the “promise land” (which nearly all tells us is Germany)) takes about 2000 each trip. I cannot say with certainty but it appears that there are between 5-7 of these charters per week.

There are also commercial ferries going to Athens (“Blue Star”) but it appears that the refugees cannot use that ship, even if they have the money.

So, they are stuck here until at their number is called to get on the chartered ship. They camp in nearly every park and sleep on the sidewalks and benches if they cannot find room. They are constantly searching for water and a place to recharge their cell phones. They do get some money from the government so the cheap eatery places have long lines. With their money, some buy tents but the government does not supply. (Remember, the government is BROKE.) There is no EU refugee representative here, nor any aid people.

Each day, I can see the GCG patrol craft returning from patrol offloading people that they have plucked out of the sea. And, for those not plucked from the sea and successfully land anywhere else on the island, they make their way to a public bus stop, get on a bus to “here,” and then walk from the bus station located on one side of the Port, to the other side, where the check-in station is.

I have been asked by some to take them to Chios, a Greek island off the coast of Izmir / Cesme Turkey, where they “hear” that processing times are shorter and there is a way to get off the island to the Greek mainland. I have even been asked to take a family to Piraeus, the port of Athens. Of course I say no but they are willing to pay up to 4 figure fees.

It is truly a disaster of HUMAN proportions.